The Shell Bone script of character Turtle is

a picture of turtle from back. 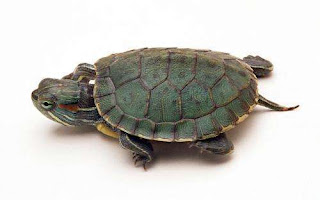 There is another shell bone script for Turtle,

which is a side picture of turtle. The top is head, the right part of the body is shell, and the two legs on the left, no tail.

There were many other kind Shell Bone script characters for Turtle.

Both are very good pictography characters.

It is similar to the first shell bone script - see the turtle from the top.

It is similar to the second shell bone script - see the turtle from the side.

which is the view from the side picture of turtle two.

Because First Emperor unified the character in small seal script, so it is the official character of Turtle.

We see the head on the top,  the claws are on the left, the shell on the right, and a tail on the bottom. It is a turtle with a side view.

The Clerical script is

Very similar to the clerical script of the character.

The current traditional song typeface is

Which is back to the first shell bone script from top vies but omitting the legs. I like this one, which is a good simplification.
One Taiwanese told me that she had trouble to write the traditional 龜 since her childhood because she didn't understand why she had to write so complicated. Actually, it is a side picture of turtle. If you know this, you could draw a head on the top, a shell on the right, two legs with the claws on the left, and a tail on the bottom, you are done. You don't need to memorize the strokes.
But it may be easier to remember 龟 , you just draw a back turtle.
The Pinyin of 龟 is "Gui1"