The Shell Bone script of character Horse is

a drawing of vertical horse, which may be horizontal one 3000 years ago. 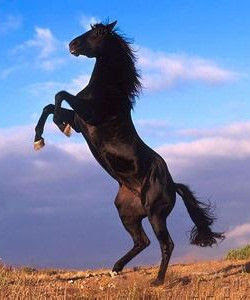 Why is vertical not horizontal? Because there was no paper 3000+ years ago, people wrote or drew the characters on bamboo slips, which are very narrow, about 8 - 10 mm wide (0.32 - 0.39 inches). It is too difficult to draw anything horizontally, so ancient Chinese drew many animals vertically. 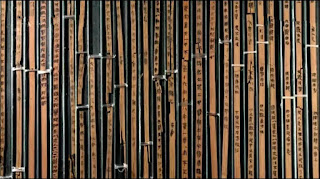 A horse with a big head and small body.
Its Big seal script is

changed a lot. The head is disappeared, the top 3 horizontal lines are hair of the horse, the 4 legs on the left, with a tail hanging on the right. Not very clear, but the similarity still can be seen. We also can understand why the Shell Bone script (above) is a vertical horse picture, which is easy to compare with the Small Seal script (below).

The Clerical script for the character is

similar to the Small Seal script, but the tail hooking inward, and the 4 legs become 4 dots.

The song typeface for traditional character Horse is

same as the Clerical script

The song typeface for simplified character Horse is

The pictography is most destroyed in order to draw a little bit less.

Its Pinyin is "Ma2".
馬 is a popular surname. Jack Ma (Former CEO of Alibaba)'s family name is 馬.