The Shell Bone script of character Door is

just a picture of door which we still can see in countryside. 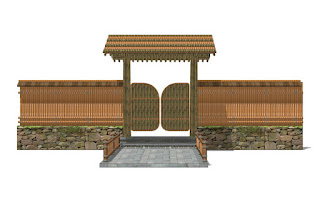 Its Big seal script is

Similar to shell bone script.
Its Small Seal script is

not much different from the Shell Bone script.

same as the previous one.

The current traditional printing script is

The current simplified printing script is

the pictography and the beauty of the character have been damaged a lot with a fewer strokes. People can't connect it to a door.