The character of Shell Bone script for Fish is

just like a fish. Ancient Chinese just drew a picture of fish in vertical direction as a character. 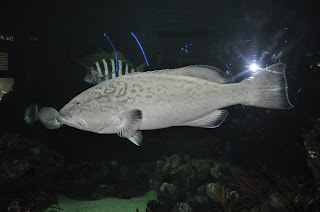 There is another shell bone script of character Fish

I need to point out that before small seal script in Qin Dynasty, the older scripts like shell bone, bronze, big seal, all have many different forms for one character.
For example 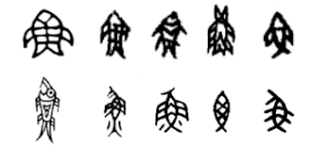 all are Fish.
So we can understand why First Emperor ordered to unify the scripts into small seal script: one character could only have one form.
Its Small Seal script is

still like a fish, but the lines are smoother.

All round, smooth lines changed to horizontal, or vertical straight lines. The fish tail became to four dots. The picture of fish disappeared even though it still looks like fish in some degree.
Traditional song typeface of character Fish is
魚
Same as clerical script.
Simplified song typeface of the character is
鱼
The bottom changes from 4 dots to a horizontal line to reduce the strokes but destroyed the pictography.
The Pinyin for 魚 is "Yu2".
Posted by Lewei Shang at July 18, 2016