The Shell Bone script of character Good is

a combination of two characters: on the left is

which is "Child", on the right is

The character means that a lady who holds a child, which is "Good". Ancient Chinese might have considered that having lady and child or children is a very good thing. 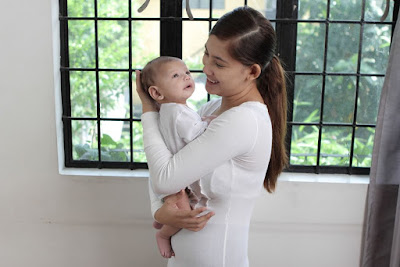 This character is an ideogram character, which is formed by two (or more) characters, normally pictography characters, producing a new character with new meaning.

the "Woman" is on the left, and the "Child" is on the right now, which is same if you feel good to have "lady and child" and "child and lady". The order doesn't matter.

Nowadays, many Chinese explain this character as "It is good if you have one son and one daughter", which is interesting, but not the original meaning. It is "Woman" not "Daughter" of the character

It is one of the most popular character in Chinese, everyone may have to say it many times every day.

It has another meaning and another pronunciation: Like or Interest, pronounced as "Hao4".
Posted by Lewei Shang at July 28, 2016