The Shell Bone script of character Bright is

formed by two pictography characters Sun (Post 4) on the left, and character Moon (Post 53) on the right. If there are a Sun and a Moon at the same time, it is bright.

This is an ideogram character.
The bronze script of the character is

The top triangle and the curve is the moon, and the circle is the sun.
The big seal script of the character is

The left is the a window, the moonlight streamed in through the window, making the room bright. 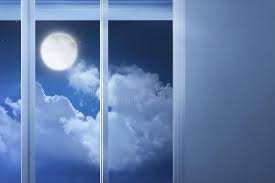 similar to the Shell Bone script.
Its Clerical script now is

just put the Clerical script for Sun and Moon together.

Its current standard printing traditional or simplified character is


明
same as the Clerical script

Its Pinyin is Ming1