The Shell Bone script of character Horn is 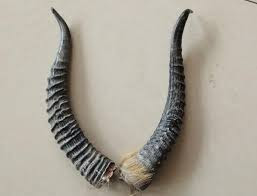 More like a horn.
Its Big Seal script is

This one is less like horn.
Its Small Seal script is

not as good as the Shell Bone script, but still like a horn.

some similarity to the above two older scripts, but people would not be able to relate it to a horn if they didn't see the older scripts.

Its Pinyin is "Jiao3"

The character 角 has the original meaning of Horn, but also has another meanings: Angle, Corner. Maybe because the Angle, or Corner has one sharp end which is similar to the Horn.