The bronze script of character Prefecture is

which is similar to the following

which is river. The curves are water flow.  Now there is a circle in the middle of the river, which is a island. It is a good pictography character. The character now means independent area, could be a city, or regional area, or province as long as not a country. There is a special use: the state in U.S.A.  because the state is a big prefecture.
Its big seal script is

which has three islands. 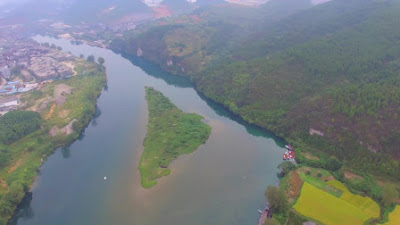 similar to the older scripts, but the flow are straight down without curve except the left one, the island circles are replaced by dots.

The current standard script for traditional or simplified character is