The Shell Bone script of Vehicle is

just like a vehicle with two wheels, and a car roof. 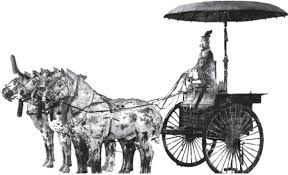 However, in the old days, there were many different characters for the same Vehicle meaning

This is view from top of the vehicle which has two wheels.

The wheels and car roof disappeared, but it is still like a vehicle frame. Unified the character is good for language which needs to be unified standard form, but not good for calligraphy as art.

The Clerical script is

The song typeface for traditional character Vehicle is

very similar with the one of Small Seal script, but the round line replaced by straight line.

The song typefacet for simplified character is

which is not like vehicle anymore. The purpose is to reduce strokes, but destroyed the meaningful pictography. When you learn Chinese from text book, you are most likely asked to memorize the 车，or 車，you have no clue why it is written like that,  you have to remember it by heart. But now you know where they are from, so you understand, and easy to remember.

The Pinyin for character 车 is "che1"