The big seal script of character Cave is

just like a the cave. The outside curve is the cave, the inside two curves are windows or supports. The cave is for people to reside inside. 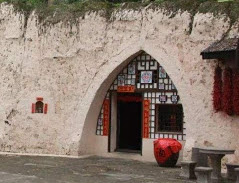 I think that it is a cave where people could live in, not any cave. The 八 under the roof should be the support wood put by people.

same as the big seal script.

some similarity, but much less like the cave. If you didn't see the above scripts, you may not think it as cave at first glance.

The current standard printing script for traditional or simplified character is

same as the clerical script. It is a pictography character.