The shell bone script for character Mother is

which may let you recall a similar character Woman (Post 20)

which is character Woman, very similar to Character Mother above except lack of two dots. Yes, Mother is Woman + two dots, which means that Mother is Woman with two breasts. 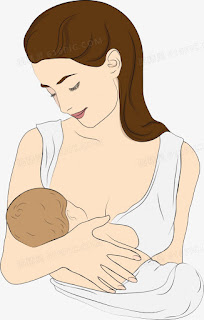 All women have breasts, why don't put two dots in character Woman? I think that the ancient Chinese wanted to emphasize to feed a baby is a mother special job, the two dots show the responsibility of feeding baby.
Its bronze script is

let us compare it with small seal script of Woman

It is easy to see the two beasts are not dots, but two short lines because there is no dot in small seal script, all dots are replaced by short lines.

changed a lot. The two dots are put in up and down, not left and right. Is there any similarity between it with the older scripts? Yes. When you turn it 90 degree clockwise, you have

the two dots are horizontal, the across arms are on the bottom left with a hook, the original vertical curve in small seal script becomes a straight line.

Which is similar to character Woman (Post 20), which is turned 90 degree in clerical script.

The current standard printing script for Mother is