Rooster is the tenth animal in Chinese Zodiac.

a lovely Rooster, seen from the front.

a Rooster seen from the side. 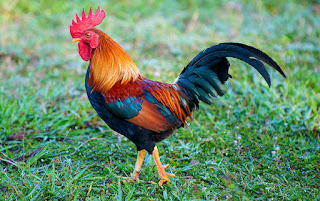 similar to the small seal script, especially on the left part. The right part is not similar, which is actually character Bird

Rooster is a bird, just can fly high.

So the clerical script is more like ideogram character.

the right part is more like the small seal script than clerical script.

There is another explanation for this character, which says that the left 奚 is a hand (the top) holding a rope tying a bird.  I don't agree with the explanation because there is another character 维 (Post 92) which means exactly the rope tying a bird, the only difference is 雞 with hand, and 维 without. However, it is possible for ancient Chinese to tie gamecock which is rooster.

very different from all above. But the left 又，looks like the chicken mouth, the right part is the simplified character bird

so simplified character is better present the Chicken.

Unlike English, Chinese use this character for Rooster, Hen, Chicken, etc. If people put a male in front of the character: 公鸡 , similar to Male-chicken, or 母鸡 - Female - chicken, etc.
Posted by Lewei Shang at August 04, 2016