The shell bone script for character Evening is

The difference between the two is the vertical line in Moon without in Evening. We can understand that in the early evening, the moon rises up, but not bright under the sunset glow. So the character Moon has a vertical line, means brighter. The character Evening is empty inside, means less bright. 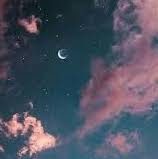 The big seal script of Evening is

Moon without the short line inside.
Its small seal script

in comparision with the small seal script for Moon

in comparison with the clerical script for character Moon

same as its clerical script.

I need to point out that the 夕 is for early evening, just couple hours after sunset, which should be a little bit shorter than the period of Evening in English.