The shell bone script of character Write is

is a hand holding a brush, the bottom is an ink stone. It shows that a person is dipping ink with a brush for writing. 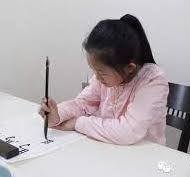 The top is hand and brush. The bottom is character 日 -  Sun. Well, now it is not sun, but an ink stone with ink.
Its small seal script is

more complicated, but we can see the fingers on top, the vertical straight line is the brush attached with some short hairs, the bottom is the sun.

the fingers are on top, the vertical straight line is the brush attached with some short hairs in the end of brush, the bottom is the ink stone.

Its song typeface for traditional character is

Its song typeface for simplified character is

changed dramatically, no fingers, no brush, no ink stone, all disappeared. This is another example that the simplified character destroyed the pictography. You could write less strokes but all strokes are meaningless.
Its Pinyin is "Shu1".
I need to point out that the 书 is used more often for its another meaning "Book". The original "Write" meaning is used less popular. But the character was created as "Write", not "Book". Book is the product of writing, so people used the same character to mean "Book".