The shell bone script of character Well is

just like a well.
Its big seal script is

What is the dot in the middle? Pictography Dictionary explains "It is an indictor to mean something in the well".  I think that the dot is bucket with a rope on it, people hold the rope to low down the bucket into well, and pull the bucket with full water up. It still can be seen in some remote countryside or small cities in China. 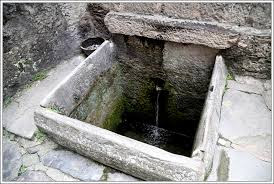 similar to shell bone script.
Its small seal script is

similar to the older scripts.

井
same as the clerical script.