The shell bone script of character Melon is

A melon is hanging under a melon frame. 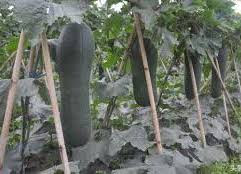 The big seal script of the character Melon is

Its small script is

a better pictography than big seal script, the melon is clearly hanging under the frame.

similar but not very good pictography. The melon is replaced by a dot on a hook, the frame support bars are bent, and short, not solid support. But it is still a pictography character.


瓜
same as the clerical script.

I have to say a little bit more about the character. Don't be confused this character with another very similar one, which is the character
爪
which means Claw.
If nothing in the end of the middle vertical line, it is Claw. If it has circle or dot, it is Melon。