The big seal script of character Seedlings is

the bottom is character "Field", and the top are sprout growing from the field. It is an ideogram and pictography character. 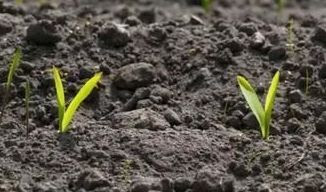 similar to two older scripts, the bottom "Field" is rectangle, and the top seedlings become two vertical lines plus a big long horizontal line, which compromised the pictography of the character.