The shell bone script of character Ghost is

a kneeling down person with a big head, which is what ancient Chinese thought a ghost looks like. According to Dictionary of pictography, it is a Wizard who wears a big skull mask in sacrifice, which is like a ghost in people imagination.

The head is similar to shell bone script. The body is not kneeling down, but a back bent.
Its big seal script is

Similar to bronze script.
Its small seal script is

similar to the shell bone script, but not kneel down with a 厶 on the low right. The 厶 means soft, floating in the air, moving unpredictably, which are ghost's characteristics, ancient Chinese believed. 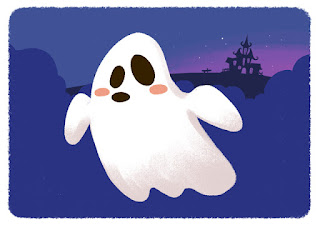 similar to small seal script, but strokes are more stretch out. It is less pictography.

Its Pinyin is "Gui3"