The shell bone script of Character Dagger-axe is 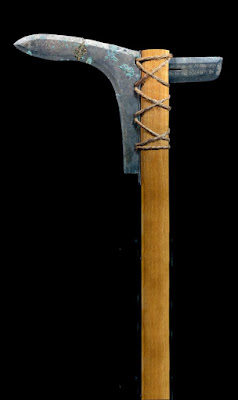 There is one more stroke in the bottom, can not.tell which is a handle or a dagger.
Its big seal script is

戈 is not used as a weapon nowadays, the character is not used alone except in proverbs, but it is very popular as a part of compound characters related to weapon or army or battle.