The shell bone script of character Pavilion is

The top is the roof and high attic, the bottom is the support, here is only pillar, a little bit unstable. 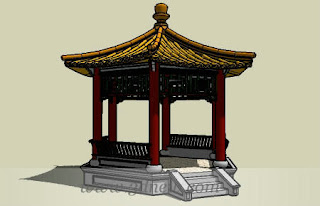 There are actually 6 pillars. But if we see it from a certain angle, we just see three of them because the back three are blocked by the front three.

It is a pictography character.

Its bottom changed a little bit, the two legs on the sides become much shorter than the middle one, the middle one has a hook which is added by calligraphists for some unknown reason.