The shell script of character Shoot is

which is a Bow and an Arrow. It is a pictography character.

The bronze script of Shoot is

We can see a bow, arrow, and a hand on the right. 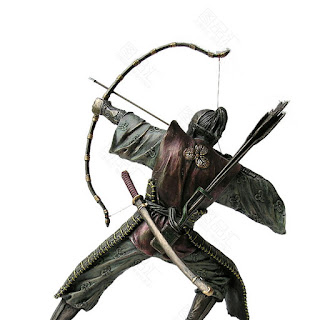 which is totally changed, no similarity to the shell script. It is an ideogram character.

The left is Body

which is from big seal script

the middle half ball is belly of a pregnant lady, the dot inside is the unborn baby. Ancient Chinese use the body of pregnant to emphasize the Body. The small seal script is similar to the big seal script buy the dot becomes a short line.

The right is Chinese Inch

which is from big seal script

the fork like is a hand, the short line is an indictor or pointer to show the distance from the root of hand to it, which is one inch. The small seal script is almost same as the big seal one. The Inch original just means hand.

The character means that people shoot through the Body, using hand.  I don't know why it changed so dramatically. Probably, there were two or more characters for Shoot, people finally agreed the ideogram one.