The shell bone of original Chinese character Dog is

a dog in vertical position. Let's put it horizontally 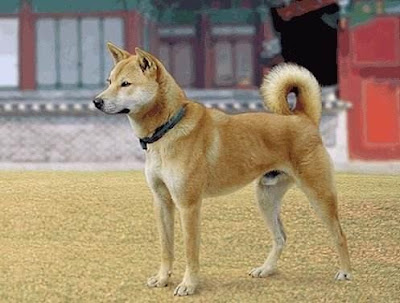 As I mentioned in character Pig, ancient Chinese wrote the characters on bamboo slips, it is easier to draw the animal in vertical on bamboo slips because they are very narrow.
The big seal script of character Dog is

A vertical dog.
Its small seal script is

which is changed so big that people can't relate it to its shell bone script. The bottom part is dramatically simplified.

which is also changed very big, not much similarity to either shell bone script or small seal script.

I should point out that there is another character for Dog (Post 123), which is very popular too. Let's see its small seal script

This one actually, the pronounciation of the character is not same as it right part pronunciation. It happens because the pronunciations of many characters has changed from their original ones.

The Song typeface of Dog is

They two are totally different in writing and pronunciation, but both mean Dog. Normally, 犬 is more formal than 狗, used more in writing than speaking.