The shell bone script of character Pig is

which is a picture of pig in vertical direction. 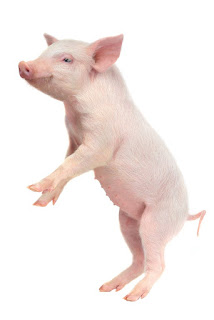 Let us see how it looks when we turn it 90 degree.

Now we can see a pig which head on the left, tail on the right, and legs.

Why it was written in a vertical direction? My rational is that people wrote or carved this character horizontally on shell or bone in the early time, people wrote it vertically on bamboo in later time because the bamboo slip is very narrow, difficult to write the character vertically.

Many other animal characters are written vertically on the same reason.

Which is a simplified shell bone script: four legs plus the tail on the left, the head is a little bit on clear.
Its small seal script is

Its Pinyin is "Shi".