Tiger is the third animal in Chinese Zodiac.

The shell bone script of character Tiger is

which is a vertical image of tiger. The top is the head, what are the two skew lines, I think that they may be the opening mouth with teeth in the far ends.
Let's turn it 90 degree

which is the tiger we see. Because ancient Chinese wrote on bamboo slips which is narrow, so people wrote or drew the tiger vertically. 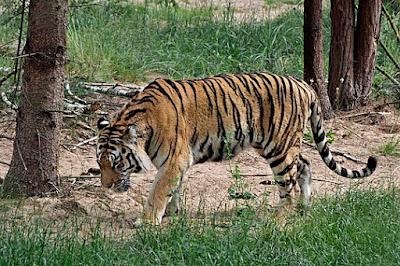 which is similar to Tiger but no body stripes, and big head.
The big seal script of character Tiger

Similar to shell bone script but no belly, and no stripes.

The small seal script for Tiger is

The top is the tiger head, then bottom 刀 is the body including legs and tail, which is really too simplified to see any similarity.

not similar to old scripts, the top is the head, and the bottom 几 is the legs, belly, and tail.

The the song typeface oft Tiger is