Mouse or Rat is the first animal of Chinese Zodiac. Chinese do not distinguish between Mouse or Rat. You may see either one on Zodiac animals dependent on the translators.

Why is mouse the first animal? There is no all agreed answer. But one story or answer is interesting. It is said that there were an animal meeting in the forest, in which to decide the zodiac. Mouse and ox started to go the meeting place earlier than all other animals. Mouse saw the ox walking much faster than him, so he asked ox to give him a ride, ox agreed. So mouse standed on the ox's head. When they were close to the meeting place, the mouse slided down along the ox's nose, he became the first animal to reach the place or the finish line, the ox was the number two of the Zodiac.

The big seal script of character Mouse or Rat is 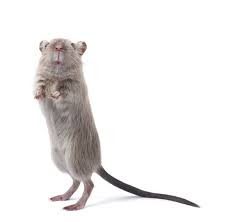 very similar to the big seal script and like a mouse.

still similar to the older scripts, but the tail is not in the middle, and difficult to consider it as a tail anymore.

very similar to the clerical script.

Just I mentioned at the beginning, 鼠 could be Mouse, or Rat. I believe that the 鼠 in Zodiac is more like Mouse.