Ox is the second animal in Chinese Zodiac,

Ox is the most important animal in Chinese life for thousands years becuase its important role in agriculture and sacrifice celemony. The shell bone script was named because the characters were engraved on turtle shell and ox bones.

The sell bone for character Ox is

an abstract picture of an ox from the front. The top sides are the two up horns of the ox. 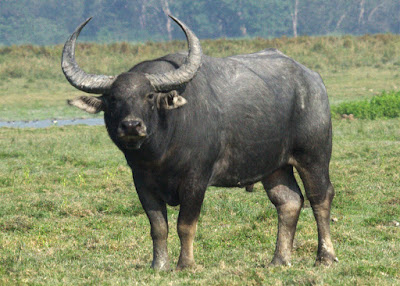 In comparison, we can see the shell bone script for Sheep

similar but the horns are bent down.

The big seal script of Ox is

Similar to shell bone script.
The small seal script of Ox is

The clerical script for Ox is

still similar, but the left horn is not like the bent horn, the right one is flat. The pictography is lost. It is difficult to relate it to ox.