The shell bone scirpt for character Year is

The character Year means a person carrying rice crop, or lift a handful rice ears to hit on the side of big wood bucket to thresh rice. Rice crop is ripe once a year, so the character was used to express the circle of rice growing. 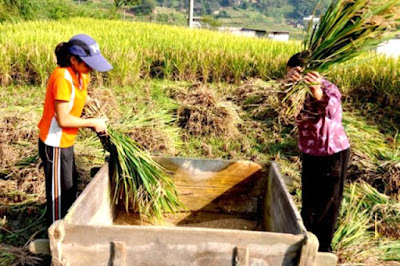 Above: ladies lift the rice handles, and hit them on the sides of the big wood basket to thresh. 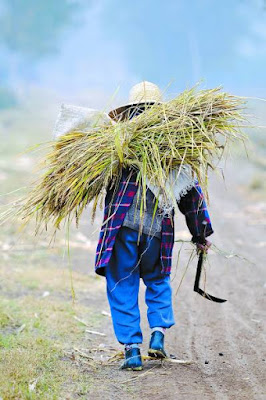 Above: old former carries rice handle on his back.

Both pictures meet the meaning of the character.

The top is still Rice Crop, but the bottom is not Person but a character of One Thousand (千）, which is interesting.

The small seal script for character Person is

The small seal script for character Thousand is

a Person with a line in the middle, which means a thousand. Original it means the Move (constantly moving), many people move the rice crops back to home, which is what people do in the harvest season.

The clerical script for Year is

which is almost no similarity to old scripts. I don't know why and how it changed to this kind form.