Elephant is not a Chinese zodiac animal, but it is very important in Chinese culture. Many many words include character Elephant.

When elephants disappeared from most of China, many people couldn't see elephant, but listened the animal by legends, the imagine elephant. So character Elephant means "similar to", "look like", not direct "be". It forms words with other characters to express anything with your imagination, e.g. “想象“－imagine, "抽象“ －abstract. Anyway, something you couldn't see, but you could imagine, which is Thinking-Elephant - 想象.

Let see the its scripts.

The shell bone script for character Elephant is

a picture of a vertical standing elephant, with a typical long nose. 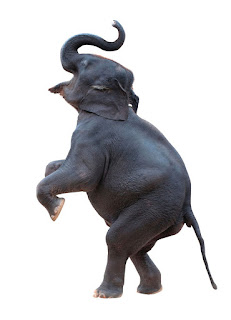 The head is up more, and the nose is shorter.

The nose is shorter, and where the head is not clear.

which is similar to its small seal script. The nose is short, and the tail is outward which is not natural, difficult to relate to elephant tail. The pictography is lost.

Its Pinyin is "Xiang".