The shell bone script of character Sky is

The top is the sky, the bottom

is character Big. Ancient Chinese thought the "Sky" is the biggest and highest thing in the universal, above Big.
The bronze script of the character is

The solid big oval is sky.

A big square or oval over "Big" is the Sky, on the top of the person who open his arms to embrace the sky. 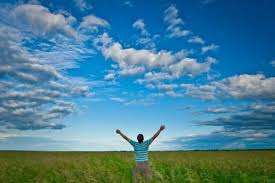 The clerical script for character "Sky" is