The shell bone script of character Can is

Actually it is a picture of mortar with pestle. The ancient mortar was pottery, so it presented "Can". It is a pictography character. 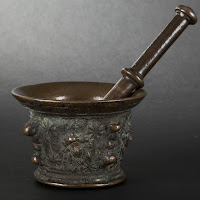 Similar to shell bone script, but the bottom is an open mouth, more like the real can.
Its big seal script is

Similar to bronze script. There is a big dot in lower part of pestle which may mean that part is the most important.
Its small seal script is

It is similar to the older scripts.

Its Pinyin is Fou3.