The big seal script of Breakthrough is

The character means a horse behind door, which is breakthrough? It is a little bit confusing.

I think what the ancient Chinese wanted to say is the dynamic moment when the horse rush to breakthrough at the door, not a horse stands quietly behind a door or inside a stable.

The door is much longer than the big seal script, which 100% cover the horse inside. We should still think it as a dynamic moment when the horse rush to breakthrough the door.

Here is my art to the meaning I mentioned above. 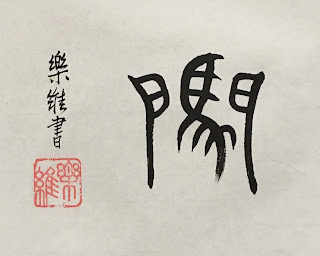 The horse broke the door and rushed out.

which is similar to its clerical script.

Its Pinyin is Chuang3.