The shell bone script of the character Dream is

the right is Bed, and the left is a person, a person is sleeping on a bed.

As I mentioned in other posts, the original characters were written in bamboo slips, which were very narrow, so people wrote or drew characters in vertical. This character is a vertical drawing of sleeping.

Here we can see a person sleeping on a bed. 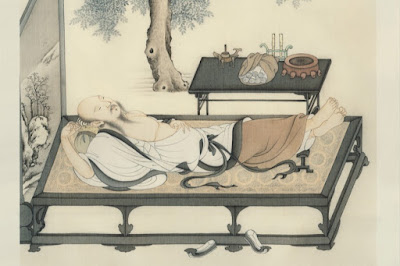 which changed a lot. We can see the big eye, and eyebrow, similar to character Eyebrow below

under the eye, something like 八 is the body of the person.
The bottom part

means Evening when dream happens in sleeping, which is extra part without in shell bone script, but there is no bed anymore.

which is similar to the clerical script.

The bottom is same to the traditional character, but the top one become 林，which means Forest, nothing to do with Dream. The reason why the Eyebrow is changed to Forest may be because people might have misunderstood the top is a grass head (草字头), not the eyebrow.