The big seal script of character Think or Thinking is

The top is head, and the bottom is heart. Ancient Chinese believed that people used head and heart to think. Even though we now know that we use head to think. But western people say "I love you from my heart", heart could feel emotions which are related to thinking. 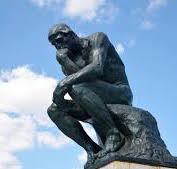 which is similar to the big seal script.

The top changed to 田，which means "Field". But it is not from "Field". The inside X became ＋, which could be result from easy or lazy writing.

which is similar to clerical script.

Its pinyin is Si1.