The shell bone script of character Voice is

The left and top is a supporter, the middle right is a hhime stone, part of an ancient percussion instrument, the bottom part 口 is mouth. 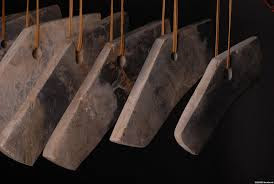 The above are chime stones.

The right top is a mallet, the bottom is a hand.

So the character is a picture, a person hits the chime stones with mallet to make music. 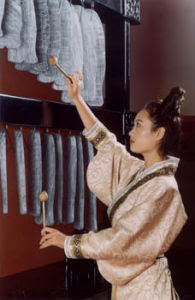 Which means Voice, or Sound.

The small seal script of character Voice is

the left top is similar, the right part is similar, but the bottom one is changed from 口 to

the character Ear, which makes sense too. You either make voice with mouth, or hear voice with ear.

which is similar to the small seal script, just the side lines don't go very deep.

which is same or very similar to the clerical script.

which is just left top part, actually it is a supporter and a chime stone. The mallet and hand on the right top, and the ear at the bottom disappeared. The character is not very meaningful anymore, it is not a good simplification.

The Pinyin for this character is Sheng1.

I need to point out that the 聲 or 声 (Voice) is exchangible with 音 (Sound) in most of cases. People even put them together as a word 聲音 or 声音，which means Sound or Voice.

The difference between them is subtle.