The shell bone script of character Rice is

The six dots are rice grains, the line is the rice straw. 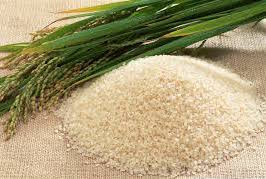 I have to point out that there was no much rice along Yellow River area because the north China was dry (even drier nowadays), not much rice in ancient time. The millet was much more popular in North China. The character original meant "Millet". But Rice had become more popular as time passed, so the character means "Rice" right now. The millet has another character to present 粟, we may talk it in another post.

The big seal script for Rice is

The top middle dot and bottom middle dot are connected. Some experts belive that people misunderstood the character.