The shell bone script of character Strength is

which is a plow. 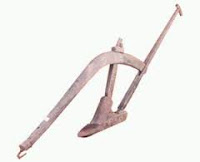 Ancient Chinese used man power to pull the plow (not Ox), so only the most powerful and strength men could pull the plow.
Its bronze script

Not similar to older scripts. The middle curve is similar, but the fork is different, but more like a plow knife.
The clerical script of the character is

which changed a lot, difficult to see the similarity.

very similar to the clerical script.