The bronze script for Rush or Run quickly is

the top is a person who moves his arms, and takes big steps,  the bottom are three feet.

Let's compare it with another character in shell bone script

Here the one foot or three feet means how fast the person walks or runs. One foot means slow, and three feet means fast. Or we can think that the one big foot is clear to us, three small feet let us feel a little bit blurring because the feet move so quickly, we can't see them clearly. 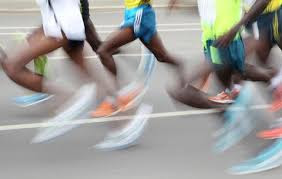 Similar to bronze script.
The small seal script of the character is

similar to the older scripts, but changed a lot, especially the character Foot, which is from unsymmetrical to symmetrical.

In comparison, the small seal script of Walk is

The bottom foot is not similar to the feet in Rush.

The clerical script for Rush is

a little bit similarity to the small seal script.

which is very similar to its clerical script.