The shell bone script of Lead (verb) is

on the left is Ox

The middle one is a circle, which is a circle of something (e.g. rope) through the Ox nose, and the right part is a leash. 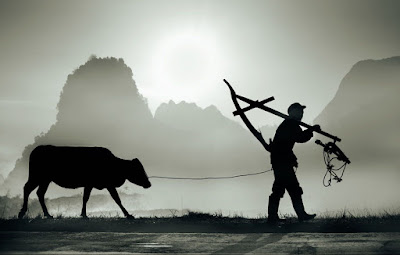 The big seal script of character Lead is

the bottom is Ox

the middle one horizontal is an open bar with two ends bent down (not a circle), the vertical is the rope and hand.

The small seal script of character Lead is

Similar to the big seal script, but the horizontal bar's two ends bent very deep, which is the style of small seal script.

The clerical script of character Lead is

It is some similar to the big and small seal scripts, but changed a lot.

Its Pinyin is Qian1.

牵 could be only used in leading an animal or person or an object by leash or hand one on one, not for leading a group, or leading a person without touching.
Posted by Lewei Shang at December 09, 2017