The shell bone script of character For is

the left part is a hand, the right part is a vertical elephant, which means that a person guides an elephant to work for people. 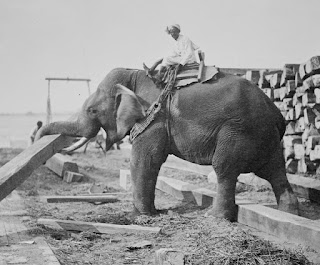 which is a little bit complicated, the top is the hand, the long nose from top right, cross to left and go down along left, the bottom five vertical lines are elephant's legs and tail.

The clerical script of this character is

which is similar to the small script.

But there is another one

It is a very interesting ideogram character.

which is similar to the clerical script above except only one dot for a hand.

which has lost the pictography, and difficult to see any sign of had and elephant. You have to memorize it even it has less strokes.

Its pinyin is Wei4.