The shell bone script of character Rich is

a house with a big rice wine jar (Post 473). It means that a person who has a house, and liquor to drink, is rich. Because in ancient time, most people lived in small caves, you must be very rich to build a house. Also people at that time didn't have enough food to eat, only people who were very rich had extra food to make rice wine or other food liquor. 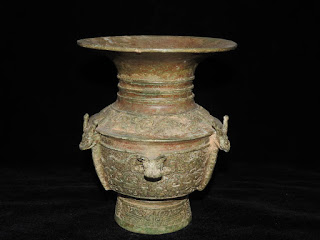 Even today, the expensive liquor may be tens thousands dollars one bottle, which is not for normal people with average income.

The bronze script for this character is

a house and a rice or other food wine jar, but different shape.

The big seal script for this character is

a house and a rice or other food wine jar in different shape.

The small seal script for this character is

similar to the above scripts, but the jar.changed to three separated parts.

The current song typeface is

similar to its clerical script.

Its Pinyin is Fu4.