We have learnt character Evening in Post (52), now let us learn character Sunset. Basically, they are exchangiable in most cases, I will discuss this in the post.

The shell bone script for character Sunset is

the middle one is Sun, surrounded by 4 Grass. It means that the Sun is low down to the level of the Grass on earth, which is Sunset. 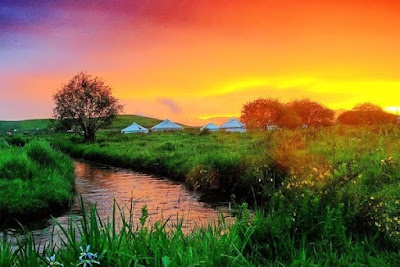 The surrounding are 4 grass, but in side is a Dog which is running a great field.

which changed a lot.

means Sunset. We have "Grass" on the top, the "Sun" in the middle, and the "Big" on the bottom, I guess that means the Sun becomes bigger when sunsetting. It also means "Do not", which I don't know why. It is possible in the sunset, the sky, the earth, the grass are blurry.

However, someone thinks the reason is that people used two Suns, one top and one bottom to show the movement of the sun during sunset.

The Song typeface is