The bronze script for character Sell is

has an Eye (the bottom) and Grow or Create (the top), the overall means Introspection.

The bottom of the full character

is Shell (currency, or money).

Sell is people who think about the right price for him to sell certain item.

The big seal script for Sell is

Which is changed a lot.

is Foot, the curve on the right bottom means an exit of a property.  I will discuss the character Out in another post.

Here the Out should mean that the opposite action of the Buy = Sell.

same as its big seal script, the top is "out", the middle is Net, the bottom is Shell.

which is more like its bronze script. The top is Out, the middle is changed from Net (网）to  Eye (目) , which may be a mistake because the two are very similar, or an intentional change back to old script.

total changed without any similarity to old scripts, and lost all pictography and ideogram.

Its pinyin is Mai4.

People put 買賣 - buy and sell together, which means Business.
Posted by Lewei Shang at May 21, 2018 No comments:

The shell bone script for character Buy is

The middle top is Shell, which was used as currency or money in ancient China. The bottom and sides is a net. If a person takes a net of money (shell), he must go to buy something. 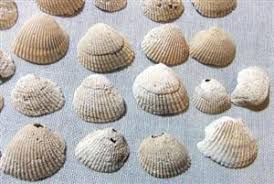 The bronze script for Buy is

The net on the top, and the shell in the bottom in this character.

The big seal script for Buy is

The net on the top, and shell in the bottom, similar to the bronze script but more symmetrical.

The clerical script for Buy is

The net on top became to a horizontal 目（Eye), which may be miswritten from 网 (Net).

The current traditional character (song typeface) for Buy is

almost same as its clerical script.

The current simplified character (song typeface) for the character is

which is completely changed, no any similarity to the old scripts, and meaningless. You have to memorize it.

Its pinyin is Mai3.

The shell bone script of character Mulberry is

The top are mulberry leaves. The bottom is the tree trunk.

similar to its small seal script, but the curve lines became to straight strokes.

Its pinyin is Sang1.

The shell bone script for character Light is

The top is Fire. The bottom is a person. A Fire on a person means Light. It is very common that people in remote area hold a torch while walking at night. Why does the person kneel down? I think that the ancient Chinese considered the fire is sublime, sacred and mysterious, human been must respect. 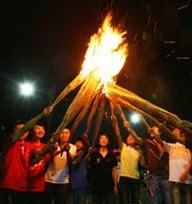 It is very similar to

The bronze script of character Light is

Similar to its shell bone script of character Light.

Still see the similarity to the older scripts.

The small seal script of character Light is

It is same, the top is character Fire. The bottom is a person. The pictography has been lost.

The clerical script of character Light is

which is similar to its small seal script.
The song typeface of the character is
光
Almost same as its clerical script.
Its Pinyin is Guang1.
Posted by Lewei Shang at May 15, 2018 No comments: