The shell bone script for character Straight is

The straight vertical line on the top of Eye means that watching forward to see if it is a straight line just as a carpenter checks if the wood side is straight. 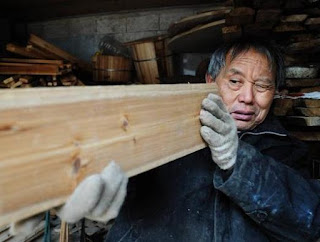 which is a eye watching straight forward.

The left is the bent line, similar to the one in the bronze script. The dot on the right top becomes a line, and the right bottom is character Eye of small seal script.

The left bent line disappeared, but the right bottom has one more line. Experts believe that the horizontal line on the bottom is from the bent line on the left in bronze script, and small seal script.

very similar to the clerical script