The shell bone script for character Fortune is

On the left bottom is a sacrifice table, on the right is a wizard who sprinkles wine on the table for the sacrifice ceremony. People did the sacrifice for good fortune.

On the left is the sacrifice table, on the right is a jar of wine. Sacrifice table + wine = Fortune, the wizard disappeared, or unnecessary to show.

similar to the big seal script on the left, the right part changed a little bit.

The left is sacrifice table, which changed a little bit from the older scripts. The right part is similar to that in small seal script.

The song type face for the character is

Its Pinyin is Fu2.

I have to point out that 福 is the most popular character in China, even used more than 龍 (Dragon). Most if not all Chinese families have had at least once to stick 福 on the door or window or both in Spring festival, or wedding, more times upside down, because "福 upside down" pronounces same as "Fortune is coming" in Chinese. 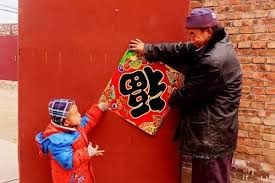 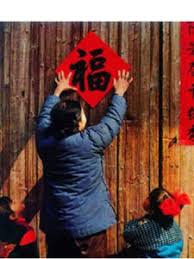 The big seal script of character of Magnificence is

which is same as character of 花 - Flower (See Post 69). They were the same originally 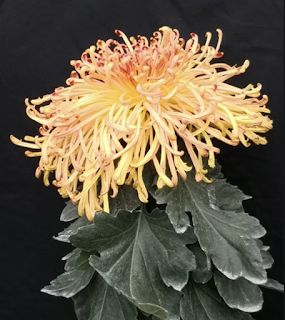 The small seal script of Magnificence is

which is similar to 花 (Flower) in small seal script.

The clerical script of Magnificence is

which is different from the character Flower of clerical script as the one blow.

The top is grass radical to indicate the character is related to grass type plant. The bottom is 化，which means Change. I guess that is from running or cursive script, which simplifies the character for fast writing.

In most cases, the Pinyin for 华 is Hua2. In comparison, Pinyin for 花（Flower) is Hua1, very close. Both characters are used as family names. 花 has the same pronunciation as Hua1, however 华 is pronounced Hua4 as a family name.

Chinese say themselves as 华人（Magnificent People). 华人 =  Chinese (in race, not nationality).

Another interesting thing about 华/華 is that Chinese call huge colorful decorated lantern as 华灯 （灯 is lantern) because it looks like flower.  （The small ones in family is not 华灯） 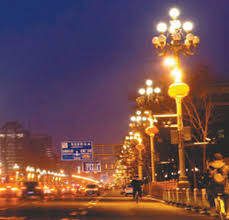 The bronze script for character String is

which is a string of beads 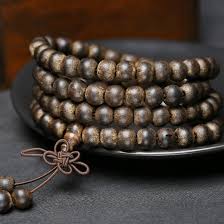 or a string of meat balls 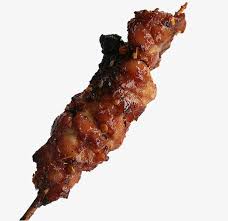 The big seal script for this character is

very similar to the bronze script.

It is like sugar-coated haws, a famous food in north China. 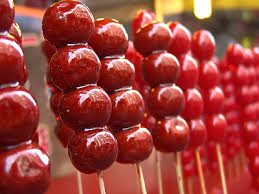 The stuff may not always ball-alike, could be other shape. The following is a string of old copper coins, which was used as money in China 70+ years ago. 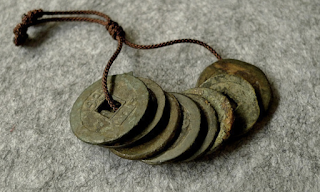 Similar to old script except the round circles become squares.
The song typeface of character String is
串
Same as the clerical script.
Its Pinyin is Chuan4.