The shell bone script for character Boil is

The bottom is Fire

The top is Wood

and the two dots are fire sparks. 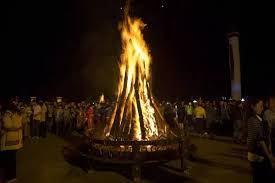 Burning the wood to grill food - the only way to cook food at that time because they didn't know how to make pots for boiling food. At that moment, the character had no meaning of -ist, -er, -or.

In small seal script, the character became -ist, -er, -or (such as cooker, scientist, tutor, etc)

The top is complicated, but we can see the Wood

but the lines are changed a little bit. The firs sparks are two curved lines on the top.

Experts believe that the bottom right now it is 曰（say), very similar to 日（sun). Experts think that ancient people sit around the fire and talked when the food was grilled. But I think that it is not a 曰(say), it is just a picture of fire pit with metal bar. There was metal produced at the time when small seal bone script created. The metal bar made the fire to have space for air, and easier to keep the fire burning.

At that time, the small seal script for Boil is

The top is same as the one above, the bottom has a Fire

The extra Fire is to distinguish the character from the above character for -ist, -er, -or.

Why did ancient Chinese make two different characters from the same one at that time?

I think the reason is because the food was insufficient, and cooking is very skillful and technique task,  unexperienced person could undercook or overcook to make the food uneatable, which is a mistake people could afford at that time. So the person who was best at cooking took the task to make sure no food was wasted. So the character became a special character for this kind person, which means that the character has -ist, -er, -or.

They added a Fire at the bottom of the character to make a new character for Boil - Boil water or food, people knew how to make pots. People created another character 烤 for grilling, which will be discussed in another post.

The clerical script for -ist, -er, -or

The top changed a lot, could not see the fire sparks and wood. The reason why it changed to that form is unknown. The bottom is like 日 (sun), not 曰（say), which means the explanation for people talking during the grilling process may be not right.

the four dots on the bottom is fire radical. The character is specific for Boiling, not grilling anymore. Probably people found that Boiling is better than Grilling in cooking meat.