There are several shell bone scripts for character Wash, let's see them:

which is a Foot in the middle, and two water drops on the two sides: washing foot.

this one is a foot in the top middle, and three water drops around. The bottom is a water bucket: washing foot in bucket. 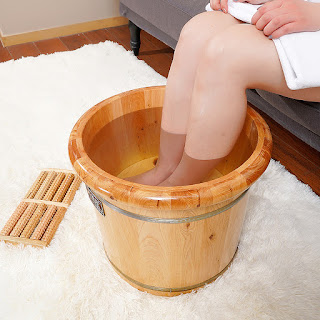 another shell bone script is

which means that foot in front of body, so foot is Before or Ahead of body.

But right now, it means that from foot to body, the full body.

We see that the full body is surrounded by four water drops, which means that a person is washing from foot to full body. 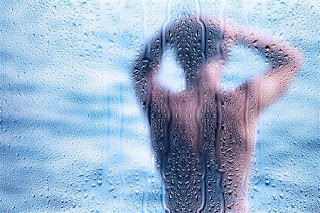 The small seal script for the character Wash is

The left is Water, and the right is Before or A foot in front of the body, which means that the Water washing the body.

The clerical script for the character Water is

The left is three drops radical, and right is the Before.

Its Pinyin is Xi3.

So we have three characters with similar meaning: 沐，浴，洗. People use 洗 the most, 浴 the second, and 沐 is used in a combination word 沐浴，which is used as an elegant expression in formal article.