There are two very similar characters.

The shell bone script for character King is

the top is ax handle, the bottom is the ax. In 3000+ years ago, China was in early of Bronze Age, people made big ax for King. So big as means the power of King. 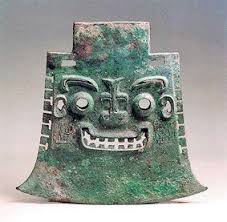 The bronze script for King is

It is clear that the bottom is ax. 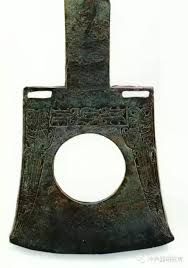 The big seal script for King is

which the curve of the bottom became a line, which is a simplification of the bronze script.

The small seal script for King is

All strokes are straight lines.

The clerical script for King is

The distance between lines are very close.
The song typeface of the character is
王
Very similar to clerical script.
The pinyin for 王 is Wang2.

three pieces of jade connected by a rope, which is totally different from the shell bone script of King. 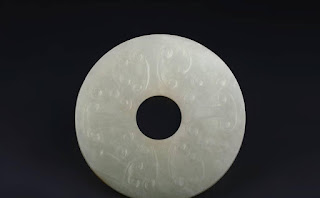 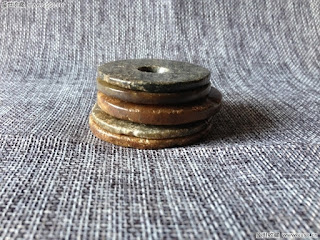 The big seal script for Jade is

Now we see almost same image as that of big seal script of King. However, if we compare the two carefully, we can find the difference.

The small seal script for Jade is

Compare it with the small seal script of King, we can find the distance between the horizontal lines in Jade is same, and different in King.

The clerical script for Jade is

it looks like the clerical script of King except the dot in the right bottom, which is added to distinguish the two characters.
The song typeface of the character is
玉
Very similar to clerical script.
The pinyin for 玉 is Yu4.

We see 王 radical in many characters, it is really a 玉, not 王. We call it as 斜玉旁 -  skew jade radical. There is no dot in the jade radical because the old script of Jade has no dot.
Posted by Lewei Shang at September 27, 2019