The shell bone script for character Kindness are

Like you may have known the fact that there were many forms of one character before small seal script. So we have 4 forms of Kindness here, but actually there should have more than 4. I got the four forms from Calligraphy Dictionary, which only select the forms are confirmed by experts.

is Sheep or Goat. The bottom are Eyes.

All four forms are a head of Sheep or Goat (Chinese don't distinguish Sheep from Goat, both shares the same character 羊). 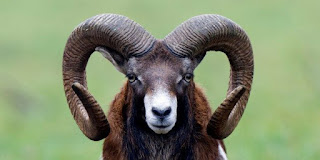 All four emphasize the horns and eyes. The horns are just indicator of sheep. Ancient Chinese thought that the eyes of sheep represent Kindness.

The character is changed a lot. The eyes are replaced by two Says. It seems that ancient Chinese at that time thought the Sheep's baa or bleat is better to present kindness.

The top is 羊 (Sheep or Goat), the bottom is 言 (Say), but only one because one Say is enough.

The top is 羊 (Sheep or Goat)

The bottom is a simplified 言 (Say). The change is unclear, so it is a little bit confused to figure out why it becomes to be like this.

Song typeface of the character is

Its Pinyin is Shan4.