The shell bone script for character Slowly is

which is a fish traps made from bamboo, still used nowadays. 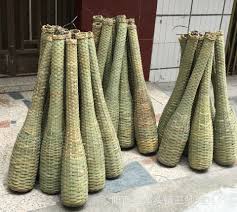 Inside of the trap is similar to a fish hook 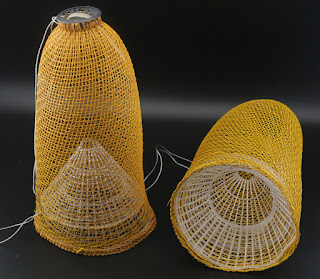 Fish could get in easily but difficult to get out. It is used most in rice field to catch loach whose body is very slippery, hard to hold. Also in the rice field, the water is very shallow (1 or 2 inches), it is impossible to use fish hook. The fish trap is the best tool to catch the loach.

Why does it mean "Slowly"? I think that the trap is set in paddy or small paddy canal where the water flow is  slow, sometimes very slow.
The big seal script of character Slowly is

The small seal script of character Slowly is

which has some similarity to big seal script, but more real in the bottom opening for fish to get in. However, the hook direction is wrong, should be V alike, not ^ alike, because fish should be easy to get in but difficult to get out.
The clerical script of character Slowly is

similar to big seal script.
Its Pinyin is Ran2.
The character is used in writing only, and not often being used. Most common using is "冉冉“ to describe the Sun rising slowly in the morning.
Posted by Lewei Shang at November 08, 2019