The shell bone script of character Meat is

which is a Knife

and a vertical line in Knife, something is cut by knife, which is Meat. 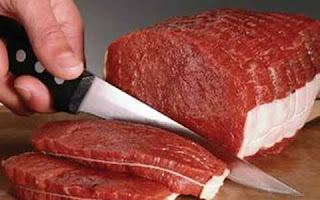 The big seal script of Meat is

similar to its big seal script.

It is difficult to distinguish the small seal script Meat from that of Moon.

Next the clerical script for the character is

the knife is a door-like shape, different from clerical script of Knife, or a little bit similarity.

inside there are two 人（Human), top part is extending out. Here 人 should mean something related to body or meat.

which is only one 人 inside.

The Pinyin for character Meat - 肉 is Rou4.

I have to point out that the similarity of the two characters has great influence on related characters. Most radical 月s do not mean Moon, but Meat or Body Organ or Body related. For example

We call the radical 月 to be Meat-Moon radical (肉月旁）, because it means Meat but it is written as Moon.

Fortunately, the confusions have not caused much problem. People have got used to. The reason may be because people just memorized the characters, don't know and care the original meaning of any character. Is it good or bad?